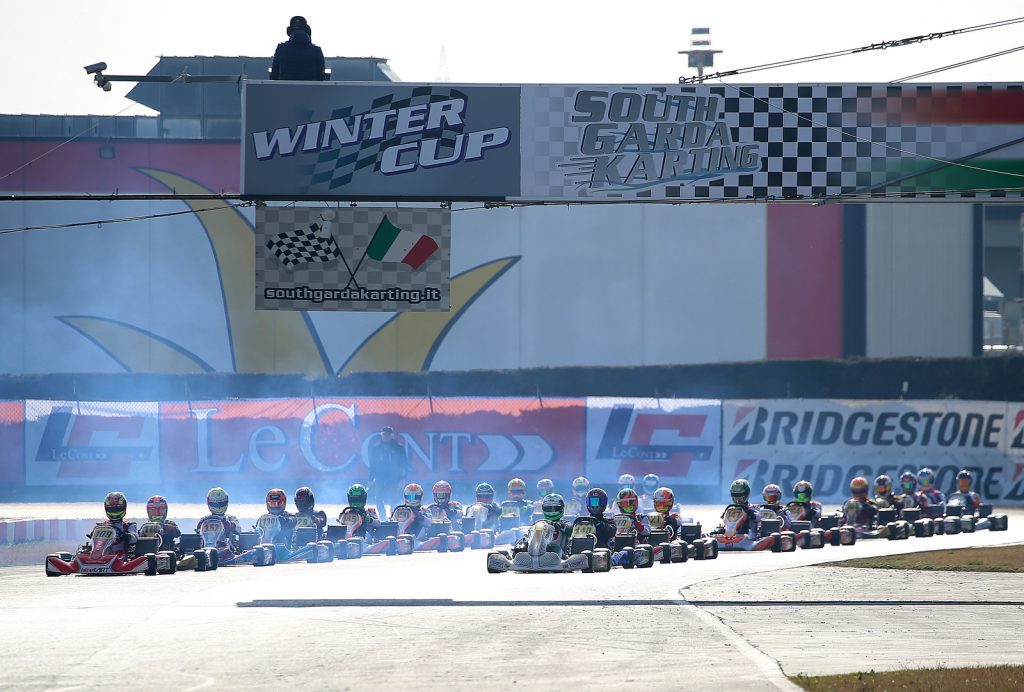 Just look at that KZ2 Shifter grid...STACKED with talent from front to back!

Saturday, February 15th, has been an intense day of racing at Lonato as the Qualifying Heats selected the best drivers going through the final stages of the 25th Winter Cup. Winners will be named this Sunday afternoon at the end of an exciting international karting weekend attended by more than 300 drivers!

The highest category, KZ2, brought 68 competitors on track where the fight for victory took the form of an internal affair between teammates Riccardo Longhi (Birel ART/TM) and Giuseppe Palomba (Birel ART/TM). Longhi won three heats, as Palomba who claimed three wins and a second place. Behind them, the Finn Simo Puhakka (Tony Kart/Vortex) secured two wins and a pair of second places, followed by Viktor Gustafsson (Birel ART/TM) and Jérémy Iglésias (Formula K/TM). Qualifying stages will end on Sunday morning with the closing heat (11:20), followed by the Super Heats and the much-awaited Finals from 15:00 (European Continental Time).

The fight among the 85 drivers has been tight in OK. Nikita Bedrin (Tony Kart/Vortex) and Kirill Smal (Energy Corse/TM) both had the upper hand with the first winning three heats along with a second place, while his pursuer claimed two races and a third place. The first Italian came third in two times World Champion Lorenzo Travisanutto (Tony Kart/Vortex) who won one heat and scored two good placings. His teammate Pedro Hiltbrand (Tony Kart/Vortex) achieved a great comeback from 30th up to eighth place after the heats. Andrea Kimi Antonelli (KR/IAME) put in a great progression. Down to 18th in Qualifying, he climbed up to fifth following his races. The closing heat will decide the final OK classification at 10:40.

In the 64 driver-filled Mini ROK class, the definitive classification after the heats features a Russian domination. German Foteev (Energy/Vortex) claimed two wins and a second place, followed by Jan Przyrowski (Parolin/TM) who took a good win and a pair of second positions. Rashid Al Dhaheri (Parolin/Vortex) was also among the front runners as the three Baby Race drivers: Adam Hideg, Aditya Wibowo, and Enzo Tarnvanichkul (all on (Parolin/Vortex). One retirement cost several positions to Dmitry Matveev (Energy Corse/Vortex) who was the quickest in Qualifying but slipped down to 20th.